On Friday night a pinch of Dunedin poets met to talk about cabbages and kings. When a pianist began to bash the cafe’s piano (not badly) but madly (and extremely loudly) we absconded around the corner to the Black Dog cafe. There we fended off depression at the state of the world, by all agreeing that we were right and everyone else wrong.

I left this cafe catch up (the kind of slipstream event I confess I’d walk 500 miles for) with the idea to write a poem about a car’s spare wheel – an idea that hit me out of the blue from an image grabbed mid-air while waiting to cross at the traffic lights.

But there was no time to write the poem because Robert and I were travelling (not quite 500 miles) towards a westering sky and on through the three hours of darkness needed to reach his mother’s home in Queenstown, where we were staying for the weekend. 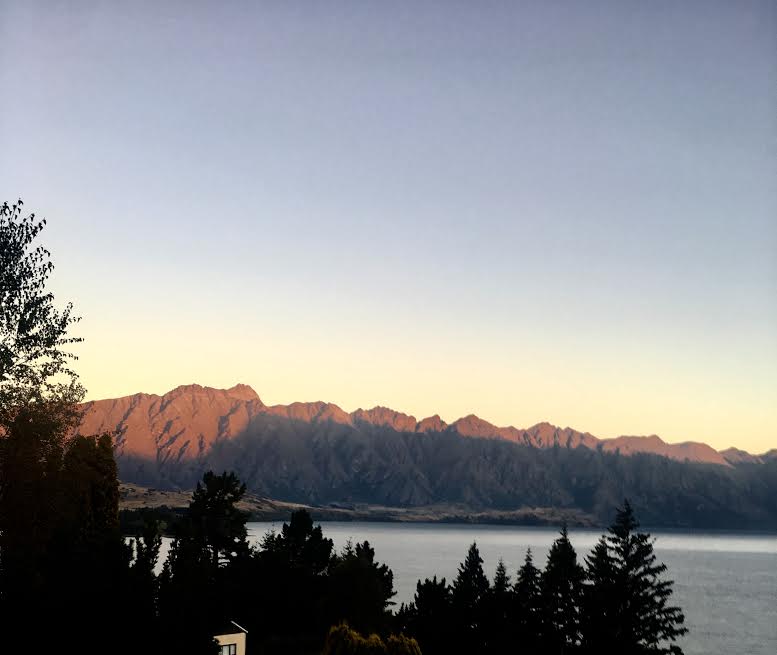 Queenstown’s beauty: a fact you cannot get away from. If you keep your eyes above its capitalist waistline; nature still rules. Nature never rests, never stops giving as it flowers between and over the concrete, cars and huddled mass of tourists. It’s there in the mountains you see as the sun sets, turning red and weirdly wonderful before your very eyes. And safe behind double glazed windows, you can’t hear the partying Brits with Geordie accents renting out someone’s beautiful apartment, ruining their carpets and yelling, “Hellooo Queenstown, we’re here to party!”

That small cabin, beyond the long grass and rust-brown dock seeds, was where Robert and I spent a night once – in the seventies. It was a crib that belonged to his parent’s, had a coal range and mice that ate the curtains. We’d forgotten to pack any blankets, but because we were young we didn’t mind. I remember seeing for the first time the view of the looming Humboldt mountain range out of the cottage’s window.

When we were in Glenorchy on Saturday, it was with some dismay to see this small town at the head of Lake Wakatipu, festooned and stippled with tourists as numerous as the spots on a dotted, seersucker dress. Yes, Glenorchy has changed much since the days when Robert’s family owned that little cottage. And going even farther back – it has changed even more since the time in the late sixties when I was fifteen and holidaying with my friend’s family in Paradise – a place west of Glenorchy and reached after you’ve crossed over (I kid you not) the River Jordan. We spent the holiday there in the Garden of Eden! Little did I know at the time, that in the 1920’s, my future husband’s grandparents lived for a while in that very spot. Wow.

On the way back home to Dunedin on Sunday, we stopped off at Five Rivers Cafe with its view out towards East Dome.

Five Rivers: ‘Takes its name from the Five Rivers Station taken up in 1857 by pioneer Arthur Hogue, and named because of the five streams which rise in the Eyre Mountains and descend in a general south-easterly direction to join the Oreti River. The five rivers are: Oswald, Acton, Dilston, Cromel and Irthing’. (Info. from NZ History online site.) There’s material for a poem in that list of names. I wonder if there’s room in that poem for a spare wheel?

6 thoughts on “Paradise and a Car’s Spare Wheel”