On this walk, I decided I’d look for signs that despite talk of winter this year doing a skip straight to an early spring, it really is still winter.

Camera in hand for photographic proof, and the lyrics to some, un-pin-downable Cole Porter song playing in my head, I set off.

The first thing to take my eye, the leonine seed heads of the agapanthus. No sign of spring in all that tousle. 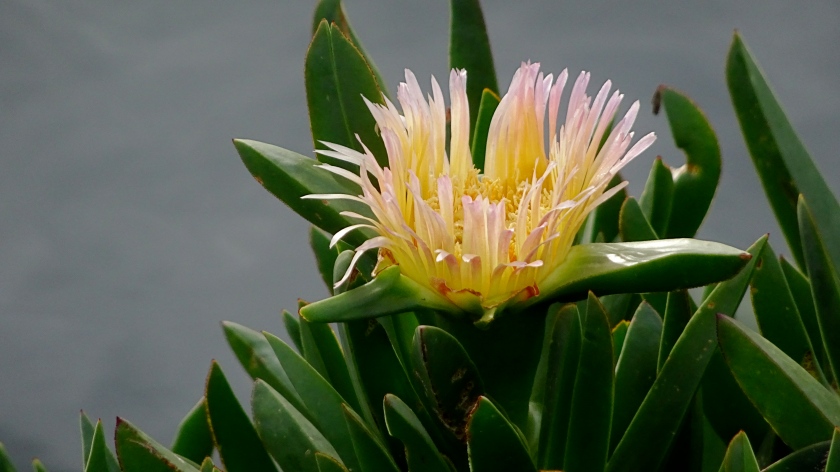 Maybe this brave and rather cheerful ice plant is a sign of spring – however, it is all alone, proving it’s most likely a bit of a mis-step. 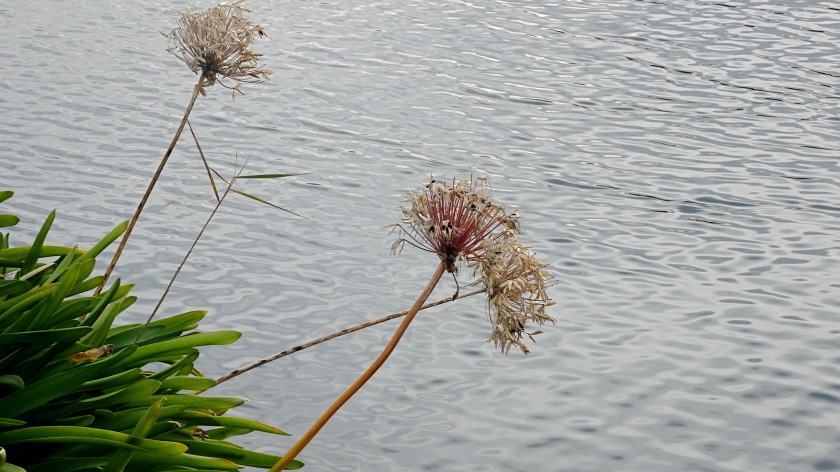 As I wandered, I thought of my novel and the help I’ve solicited from a lovely editor and how close I am to finally getting it published. Such thoughts were definitely putting a spring in my step. Ah-ha. Spring. Maybe it’s closer than I think. Metaphorically speaking, of course. 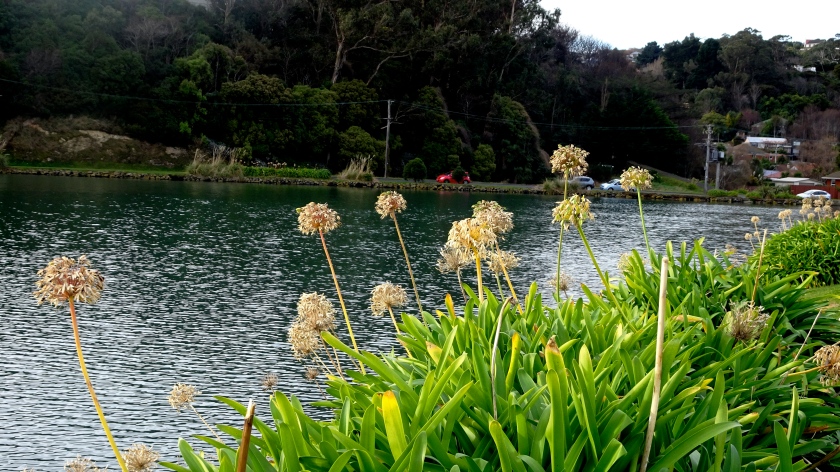 Heading away from the inlet and back home, I was still looking for winter wherever it was to be found …

Some trees just don’t get the idea of a winter’s breather. Like this stalwart of the evergreen, the eucalyptus. Unlike the deciduous varieties of the tree world, it ploughs on, manufacturing sap right on through winter.

On our street, a gate providing a flash of red among winter’s drear.

And these hydrangeas, undeniably, a winter study. 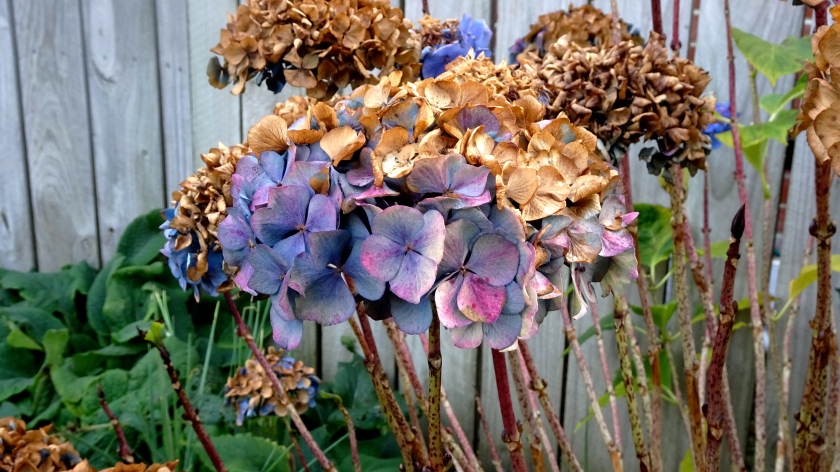 There is beauty to be found in winter’s pale greys and bare browns. Spent leaves turn to winter-thin wafers. 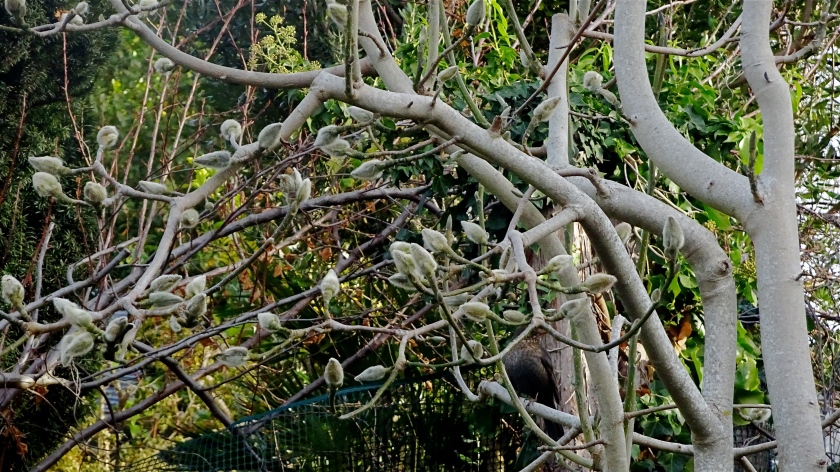 Our neighbour’s magnolia in bud. Signs of spring … but not here yet.

A moss-covered trunk of a silver birch tree – one of several up our driveway that had overgrown their welcome. Its position under power lines was becoming dangerous and so we had to have it cut down, about ten years ago. Some type of fungi has taken to the trunk in rather spectacular fashion.

In one of life’s delightfully picaresque coincidences, our son – in another city altogether from Dunedin – is working with a woman in the same city, who (as they discovered to their mutual surprise) used to live in our house. In fact, her parents built our house. It turns out that her father planted the line of native trees along our driveway, the same year as the Waihine disaster (which, coincidentally, is the same year as  my father died) in 1968.

Now whenever I walk past these trees, I think of the serendipity of all this … I think of that year and these trees that I love and the man who planted them, of his daughter who works with our son, and of my father. It’s typical of how the past and the present and the future are all so often wrapped up in the gift of trees.

The photo above shows the only deciduous one of these trees, its small cones in winter, rubies against the sky’s light. 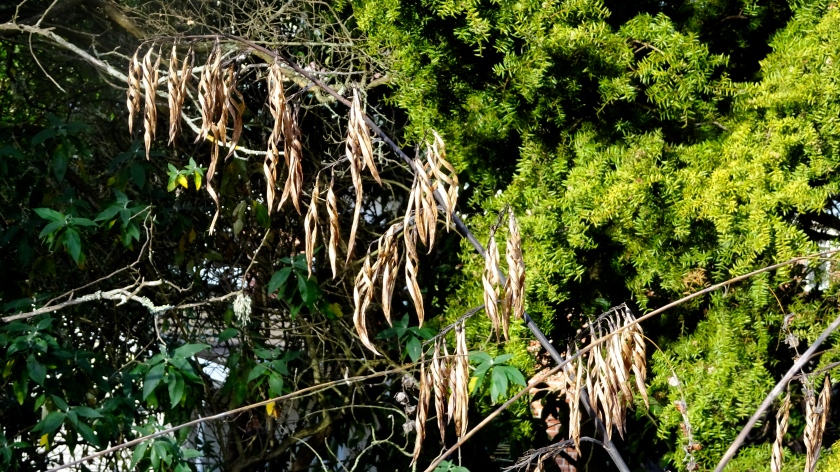 Here the lime-green aspect of one of the aforementioned native trees, provides light relief and a background to the winter aspect of dry, flax (harakeke) pod fronds.

Yes, it’s still winter – all these photos are of nature proving it. But if nature was a clock face, I imagine the hands are at 11.45. It’s undeniable. Spring is in the wings, tapping its foot. But until it’s spring’s turn to once more take centre stage, I’m going to keep enjoying whatever is left of this winter’s performance.